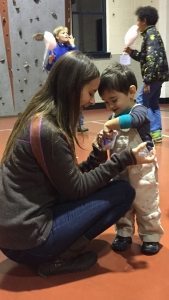 What a blast we all had on Friday night at #science, the first event of the [email protected] series! We welcomed BCD families and guests from our community to campus as four slightly looney but very enthusiastic “Mad Scientists” helped us explore the wonders of science in fun-filled hands-on ways.

Mad Science station 1 involved the creation of slime in a variety of colors and consistencies from icky to gooey to slippery to rubbery, all dependent upon the vigor and duration of the slime-shaking dance that the young (and old) chemists were willing to do. As you can see from the photo above, feeling the resulting compound was more than half the fun!

If you look behind the scientist (and his mom) in the picture, you’ll see the end product of science station 2. What happens when you apply heat to sugar crystals? A transformation of matter!  If you spin the resulting melted sugar stream just right,  you have COTTON CANDY! Yum all around. (And yes, there were quite a few moms and dads who sent their kids back to station 2 to make sure that they understood the concepts behind these two states of matter.. oh, and incidentally got an extra confectionary cone that a conscientious parent just couldn’t let go to waste.)

Station 3 involved experimenting with various polymers to see how they reacted to the addition of H2O. From sand that held its shape and could be sculpted like clay to small BB-sized balls that grew and grew and grew until each had the dimension of a marble (and they are still growing in my office so who knows how big they’ll be on Monday!), to a fine powder that became a snow-like substance when wet, polymer play intrigued us all. (In an interesting connection, the students were fascinated to learn that the concepts involved in their making “snow” also tied to our upcoming Diaper Drive, because these particular polymers are what makes disposable diapers absorbent!)

Our final science station 4 was filled with buzzing and zapping and movement. As they explored conductivity and energy, students held small devices still in their hands (potential energy) then shot them high into the sky (kinetic energy). Kids attempted to have steady surgeons’ hands as they moved a small ring along a charged wire trying not to make accidental metal-to-metal contact that buzzed an alarm! As the kids learned, even their own bodies can conduct energy in the form of a static charge. Zap!

As one of the “Mad Scientists” said, “Science should be fun so that kids know that anyone can be a scientist and discover the wonders of our world!” If Friday night is any indication, she is absolutely right!

For updates about what is coming next in the [email protected] series, don’t forget to FOLLOW us on Twitter, @bcdstockbridge.