Let it be known that, the students of Berkshire Country Day School have spoken. Our penguin mascot, selected to represent our school back in the late 1940’s, now has a name.

The students at Berkshire Country Day School were invited to contribute their choice of a name for our penguin. Many interesting selections were provided. A list of final names – ones that had the most entries, were compiled into a short list. These six names were then shared back with the students for a final vote. 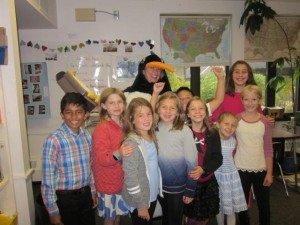 And…the winning name…BLUE! Our penguin mascot shall henceforth from this day forward be referred to as Blue.

How, you may ask, did the penguin come to be the mascot of BCD? According to Lila Wilde Berle, BCD class of 1950, when she was a student here, she and her Upper and Middle School peers also experienced a student voting process. Their vote revolved around naming the animal to represent the school. Animals considered included a wolf, a coyote, and a panther.

As Berle states, they were “fierce animals for the most part” that were being put forth for consideration.

“I remember,” says Berle, “It was a very civilized process to pick the animal. We went through every animal we could think of. It ended up being the penguin…we all thought that was very cute…it was kind of ‘this is who we are’. ”

Now in 2017, Blue won the BCD name contest up against other front-runners such as Waddles, Percy, Patty, and Marley. 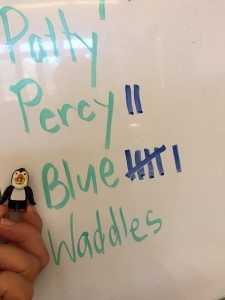 Other interesting names that were suggested in the first round of student voting? Googenfox, Icy, Snowsquall, Juan, Peggy, and Chilly.

On Friday, October 6, 2017, the winning name was announced to each class via live penguin hand delivered scroll. A naming ceremony is in the works to officially bring Blue the Penguin to life. Look forward to increasing news about Blue’s adventures, to seeing Blue at BCD events, and to an annual birthday party celebrating Blue and BCD pride in the years ahead.