The Face of Perseverance: A BCD Story! 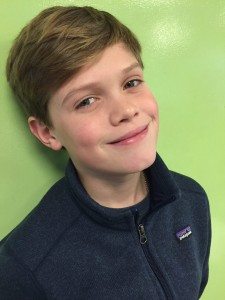 Each school year, for each of the three terms at BCD, Upper School students participate in Arts Blocks. The students are provided a catalog featuring a selection of various types of courses in the arts—music composition, sculpture, band, painting, drama, or drawing—and students choose two Arts Blocks per term. The options change each term, although some of the Arts Blocks courses, like Yearbook, remain constant.

As a school, we do our best to try to honor students’ first or second choice Arts Blocks selections, however, at times, due to numbers and popularity, we need to spread the students out to have balanced enrollment in the different courses. Therefore, occasionally a student may end up in a third choice Arts Block.

In the fall term of the 2017-2018 year, one of our 7th graders, Jack, was placed in his third choice Arts Block. Very politely, Jack approached me and asked, “Do I have to stay in this Arts Block?”, and I responded, “I’d like you to give it a try.” Jack replied, “OK.”

Jack immersed himself in his new Arts Block. Vocal Ensemble, something very new for this triple-sport competitive athlete (soccer, tennis, and lacrosse), became something where Jack was soon an active and engaged participant. He was a rock star, practicing various vocal parts, auditioning for solos, and ultimately delighting and entertaining many at both Grandparents Day and the BCD Winter Concert, where Jack sang a solo section of a complicated and beautiful song Rise Up by Andra Day. (Interesting enough, this song is about resilience and perseverance).

Now in our second term of the year, not only has Jack stuck with Vocal Ensemble, this time selecting it as his first choice option for his Arts Blocks, the Vocal Ensemble enrollment has increased from 7 participants in term one to 13 partici 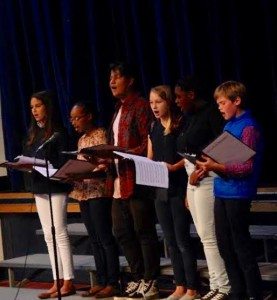 pants in term two. I firmly believe that Jack’s enthusiasm for the block was an inspiration to his peers and that it magnetized some of them to try it, too.

Too often these days, so many of us resist discomfort and the unknown. Frequently, parents advocate for their child to prevent the child from having to potentially experience something of a challenge or temporary struggle. I think Jack’s story shows us all what can happen if we try something new. If we engage in the unknown, if we wade through the period of uncertainty, there is the potential to gain and win on the other side.

Being so impressed with Jack’s willingness to try to the new Arts Block, and equally surprised that his parents had not called and requested that he be moved from this third choice Arts Block, I saw Jack’s mom one day and shared my delight and admiration for Jack’s engagement. Jack’s mom shared that that is how it works in her house: you give effort to new things and you follow through on things you begin.

Let Jack’s readiness to engage in discomfort be an inspirational story for us all. I encourage you to share his story with your children as well.

What if we found out we like and were good at diving into the unknown?

What if we tried something new and really engaged in it and found we were really good at it?

What if we tried something unknown and through doing, inspired others to take such a risk?

You never know until you try. Bravo, Jack!

We are at it again at BCD! Working together to grow and improve our practice, and having fun while doing it.

On Monday, October 2, we had a full day faculty in-service day. We spent the morning together and in teams looking intentionally into our social-emotional curriculum and program.  We asked ourselves: What is our purpose? What is going well with our current approach? What needs our attention for improvement?

We also spent part of the morning gearing up for the kick off of our through-school service learning focus, which launched into the inquiry and identification phases in all grade levels (except B2) on Wednesday, October 4 (more on that soon!).

During the afternoon of our in-service day, we were fortunate to participate in a mock version of Arts Blocks, our signature arts program for Upper School students (grade 7-9) where they choose two art electives per term. They choose between music, visual arts, and performing arts options, each of which meets twice weekly throughout the term. Yesterday, the BCD faculty also participated in selecting and attending Arts Blocks of their choice.

Led by three of our multi-talented Arts Team faculty, the following Arts Blocks options were offered. 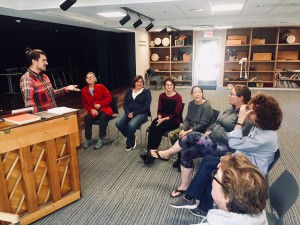 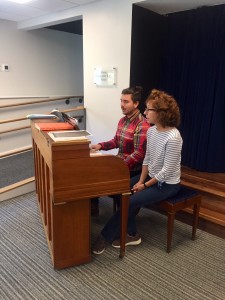 ou love to sing? Let your voice soar with Faculty Ensemble. In this class, we will build each musician’s current skill level in vocal technique, sight-reading, ensemble skills, and music theory. We will prepare fun and engaging musical presentations and prepare to share them with the community. We will also grow as an ensemble and foster a supportive environment for musical discovery. Give it a try! You’ll be amazed by what you can accomplish.

A Version of You with Sasha Sicurella (Visual Arts Program Coordinator) 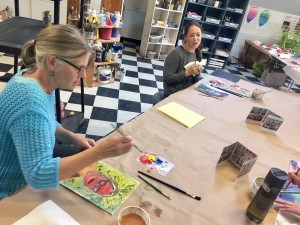 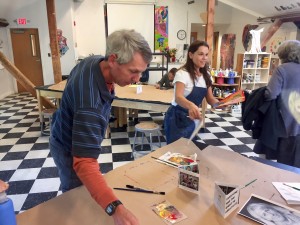 Create a mixed-media self-portrait that combines elements of photography, drawing, painting, and, of course, your own imagination! See examples of similar projects that Ms. Sicurella has done with children, youth, and adults in 20 different countries around the world and learn how this activity has helped people to discover parts of their own identity through the process. You will be amazed by your hidden artistic ability and by the version of you that will be created! 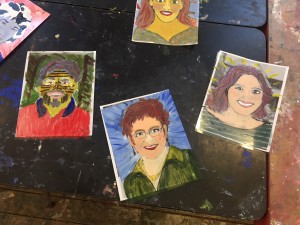 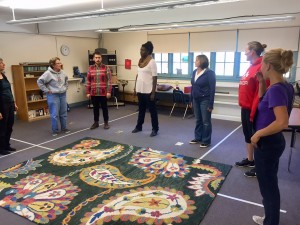 Have fun and get creative with your colleagues! Be prepared to move around and collaborate. Through engaging exercises, we will create a short performance composition. No matter your level of acting or an aversion to theatrical specimens, you’ll fit right on in. There’s no right or wrong, just what you want to bring to the table! 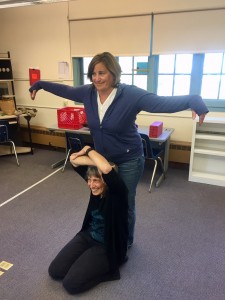 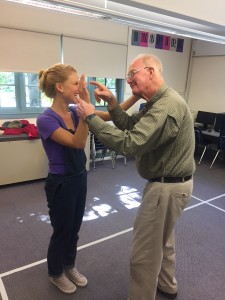 The workshop titles and photos speak for themselves. Creativity was in action. Risk taking was abundant. Teamwork was flowing. Fun was had by all. Once again, Berkshire Country Day School teachers shared their dynamic teaching skills with their colleagues. Back together at the close of the day, we reflected and we agreed how fortunate our students are to have such talented Arts teachers, and how truly inspiring the arts program is here at BCD. What a wonderful way to spend a day together becoming intentionally enriched and thoroughly inspired.