Mois de la Francophonie, How Will We Celebrate at BCD?

We will celebrate La Francophonie Month at BCD in several ways, starting off with a crepe-making ‘atelier’ on Friday, February 1, with grades 4-8. My husband & local chef, Benjamin, will help us to assemble our ingredients and share the technique to making a perfectly thin and delicious crepe! …more details to follow, to be distributed by email per grade.

Another way in which students will celebrate Francophonie month is by participating in an international ‘Slam poetry’ competition, called ‘Slame tes Accents’.  Through this competition, the Center of Francophonie des Ameriques aims “to highlight the diversity of French accents hosted by the Americas, to highlight the vitality and dynamism of the Francophonie of the Americas and stimulate interest in the Francophonie by demonstrating to students the power of words. Whether French is your second or mother tongue, whether you are starting out or perfecting it, display your accents and make them vibrate in video form!”

With grades 7 and 8, we will create a video of 60 to 90 seconds. Our class slam must integrate some 15 proposed words. This is an opportunity to celebrate the richness, vitality, and diversity of the French language during the month of the Francophonie.

Here are some objectives of the competition, which we will approach in a way that best represents our Francophone culture at BCD and our school community! …

Stimulate interest in the Francophonie of the Americas in educational institutions.

Generate the pride of speaking French and belonging to the Francophonie family.

Engage students in their learning of French.

Demonstrate the evocative power of slam.

Among the many prizes offered is the chance to win a visit to the school by Mathieu Lippé, a popular artist, singer, and slam poet from Quebec who has enjoyed great success among young people with his “contagious” dynamism. His visit, in the form of a creative workshop, will certainly help stimulate and promote student interest in the French language.

For more information about this engaging and inspiring educational challenge, please follow the link; http://www.francophoniedesameriques.com/slame/

Over the summer, I spent time preparing materials for the new year. I tapped into new resource providers, like the publisher Bayard-Milan, and I am looking forward to implementing new resources in partnership with what is currently in circulation for native-speaking students in France. I’ve built on my visit last Spring to the International School of Boston (ISB), a bilingual French-American school, have reviewed my notes, and am bringing new ideas into play this year throughout the various grade levels here at BCD. While visiting ISB, I spent the day shadowing French teachers in different grade levels, 1st through 5th, to get a firsthand account of a day in the life of a French immersion school.

Reading in the target foreign language is a pillar in strengthening a student’s aptitude and comprehension. In French class at BCD, I will continue to include French stories and French language educational magazines into daily classwork, which will encourage the students to learn about themselves, the world around them, and about expressing their unique personality … in French!

In keeping with my goal of encouraging reading in French, earlier this summer I applied for a grant through the French Consulat General in Boston. https://boston.consulfrance.org/-English-

The grant was titled “The Magic of Reading in French; ” its goal is to bring free books to children enrolled in French classes in both public and private schools across New England. The objectives of this fund are to:

When I arrived on campus last Friday, I found four big cardboard boxes full of brand new French books for BCD! These 70 books will contribute greatly to our school’s French-language literature resources which will be used in French class across the grade levels. I also encourage students and parents to borrow books as often as they’d like to read at home.

The different resources and the experiences I refer to in this post, combined with the enriching, culturally appropriate, and level-appropriate novels and multimedia tools we currently use in my curriculum, will help enable the continued discovery and encouragement toward the enjoyment of literature in French at BCD.

I hope that you have all had a fun summer! I, along with my colleagues, are so happy to welcome you back to the BCD campus this week, or to campus for the first time if you are a new student and family! Here’s to a great year!

On Monday May 21 I had the pleasure of introducing my 7th grade French students to my father-in-law, Philippe Daire, who is currently visiting from France.

Philippe was born in Paris in 1934, and was 5 years old when World War II broke out in Europe.

He spent 40 minutes with our class telling the students about his childhood, how his mother had to send him to ‘La France Libre’ (Southwest France) where the German army had not yet claimed control, to live with his grandparents, as Paris fell to the German army in 1940. For more than 5 years of his early childhood, he was seperated from his parents; he barely knew his mother, as she had to remain in Paris to work, while his father, Maurice Daire, a member of the French army, was taken as a prisoner of war and was held for several years in a German work camp in Austria.

Philippe was 11 years old when he saw his father again.

Philippe’s father-in-law, Roger Leduc, was a member of the French Résistance movement, and he spoke to the way that this collection of civilian “soldiers” fought against the Nazi German occupation of France and against the collaborationist Vichy régime during the Second World War. He told the students how English bombers would fly over the channel and drop military rations by parachute to the Résistance troups hiding deep in the forests of France.

It was a unique and rare experience to be able to hear a firsthand account of life in France during World War II, to learn how his life was affected, starting with what a child would notice the most… a shortage of chocolate, to the more severe and debilitating results of the war such as food & coal rationing, to clothing rationing, as with each year supplies grew more scarce and prices grew higher. Young French men were sent to Germany for STO (service de travail obligatoire) to run the German factories and be their work force … and for men such as Philippe’s father-in-law who decided not to join the STO to instead become become freedom fighters/ aka La Resistance who answered the call of General DeGaulle to fight behind the lines of the German occupied France in the effort to sabotage and slow down their forces.

Philippe shared with the students his emotions, the emotions that he can remember, of feeling utterly hopeless in the face of the German army, to the glimmer of hope that arrived in the form of American ‘flying air-fortresses’ that could be heard flying high above France in 1944 & 1945. 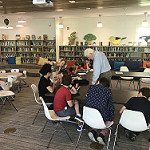 The students prepared questions to ask Philippe at the end of his presentation, ranging from inquiries regarding his personal experience of growing up during the war, to whether or not he had ever met a Nazi. He told of his encounter with a young German soldier in the streets of his village in the La France ‘libre’, one who was barely 18 years old, how through a child’s eyes the man seemed normal and kind, but how the terrifying reality of why he was in France and what he was a part of would haunt him for the rest of his life.

I feel that our students found Philippe’s visit to be enlightening and special, as with each day, month and year that pass our world sees fewer and fewer survivors of World War II.

I hope that they will remember his words in the years to come as they begin to study WW II in more depth in their Upper School and High School history classes. 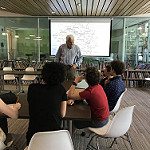 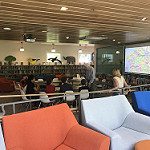